Stasia: By the Book. 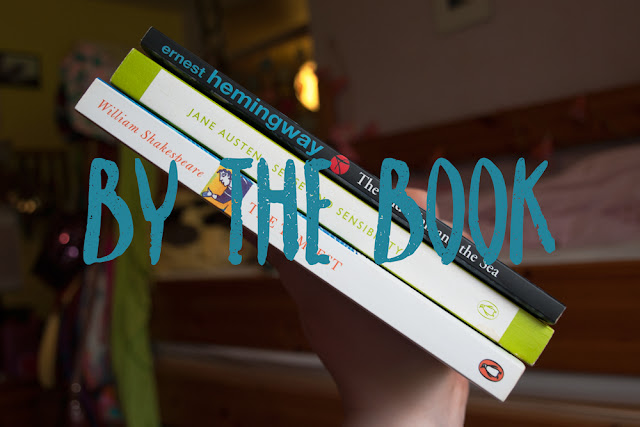 I know this is a beloved feature that The New York Times has been doing for some time, but I actually only heard about it when Jillian did her own version on her blog a few weeks ago. I've since read quite a few of the ones on The New York Times's website and it seemed like a fun idea to choose a few questions from some of them and make my own so here we are!

What books are currently on your nightstand?
I don't actually have a nightstand. What I do have is a pile of books on the floor next to my bed, which is my immediate TBR pile, and the book I'm currently reading is usually hanging around on my bed or on my desk. Right now I'm reading Percy Jackson and the Last Olympian by Rick Riordan and the books on the pile next to my bed are The Wind in the Willows, Career of Evil, Northanger Abbey, Six of Crows, and The Mists of Avalon.

Which genres do you especially enjoy reading? And which do you avoid?
I used to read almost exclusively young adult contemporary romance novels, and still have a real soft spot for them, but I'm really enjoying more classics and fantasy at the moment. The only things I really tend to avoid are horror and erotica, but I mean, I'll try pretty much any genre once.

Which writers - novelists, playwrights, critics, journalists, poets - working today do you admire most?
Rainbow Rowell immediately springs to mind because she seems to have this fearlessness that I really admire when it comes to the different genres and age groups she writes in. It really seems like she can turn her hand to almost anything and it will be fantastic. Also, J.K. Rowling, obviously. To have written the most successful book series of a generation and then not succumb to the, I would think, almost inevitable fear of following that up but instead keep going in a completely different genre, must have taken a lot of guts. Clearly, the ability to write across genres is something I admire a lot.

You're hosting a literary dinner party. Which three writers are invited?
Ernest Hemingway, Jane Austen, and William Shakespeare. It could be a disaster but who wouldn't want to say they've had dinner with any of those three? Alternatively, I think Rainbow Rowell, Meg Cabot, Maureen Johnson, and I would all just genuinely have a great time. So either or.

What's your ideal reading scenario? Paper, electronic, late at night, morning, in the tub?
Definitely paper. I do read on my iPad and I think it's great, especially for travelling, but you can't beat a real book. I tend to read mostly in bed before I go to sleep and when I'm in the bath, but my absolute favourite place and time to read is in the garden, in the early evening, in the middle of summer.

Who is your favourite fictional hero or heroine? Your favourite antihero or villain?
After all this time I think my favourite hero is still Harry Potter. It might sound nuts, but I kind of think he's underrated a little bit. I think people concentrate on the surrounding characters a lot more and sometimes forget this tiny child at the centre of it all who constantly throws himself into the fight and willingly walks to his own death to save the world. I don't think you can get more heroic than that. As for villain? I guess I'll go for Voldemort. You can't have one without the other, after all.

What kind of reader were you as a child? Your favourite book? Most beloved character?
Determined. I remember finding out that one of the boys in my class was reading books from a higher level than me when I was about five and literally telling my mum that I wanted to be better than him at reading. I aimed way too high, trying to read Lord of the Rings when I was nine, actually reading About a Boy when I was ten, and mum used to complain that I was reading books faster than she could buy them. I succeeded though. I mean, I don't know if I ended up being a better reader than the boy in my class, but at age 11 I apparently had the reading age of a 16+ year old, so that was good enough for me. I loved Roald Dahl, J.K. Rowling, Lemony Snicket, Meg Cabot, and Jacqueline Wilson, but clearly I would read pretty much anything I could get my hands on. I don't know about most beloved character but I did choose to be Ron every time I played Harry Potter with my friends at lunchtime.

What books are you embarrassed not to have read yet?
So many. Most of them classics. All of Jane Austen's novels, which is why I'm taking part in the Austentatious book club, and Catch-22, which I borrowed from my dad like ten years ago and still haven't read, are right at the top. Also, my mum bought me a really beautiful Folio Society edition of The Railway Children when I was a child because I loved the movie and I still haven't read that either.

Whom would you want to write your life story?
Oscar Wilde. Go big or go home, right?

What do you plan to read next?
The Wind in the Willows. I'm seeing the stage play next month and I really want to read the book first.