I failed Camp NaNoWriMo but it's okay.

Remember at the start of this month when I talked about my goal to write 40,000 words for Camp NaNoWriMo? Well that didn't happen. 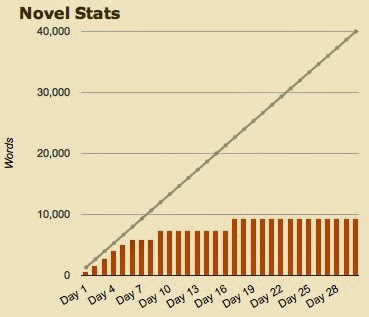 As you can see in this graph, except for a one day burst in the middle there, I pretty much gave up around about the same time that I made that post and never even made it to 10,000 words. At the start of the month I was actually ahead of everyone else in my cabin for word count and pretty sure that I was going to at least hit 30,000 words by the end of the month but after a few days I just started to lose interest and eventually I decided to give up.

It can be difficult to give up on a project like this but I think it's important to know when you have to quit something. I knew I was losing interest in my project so I made the decision to focus my efforts on other things and not just spend the month forcing myself to write something that I no longer really wanted to write. And I know that was the right decision.

I posted more on this blog in April than I ever have in a single month before, and I've been planning even more posts for the near future. In fact, right now I'm writing this post days before I plan to post it and it's the second post I've written today, which is pretty unusual for me since, embarrassingly, it usually takes me at least two days to write a single post.

I also rediscovered my passion for scriptwriting and the theatre and I've started planning and researching a couple of ideas for plays, which is something I've only thought about doing since I finished university.

So maybe the Camp NaNoWriMo project didn't get anywhere but I'm happy with the things I have achieved this month, including recognising when it was time for me to give up on that project and focus on other things.