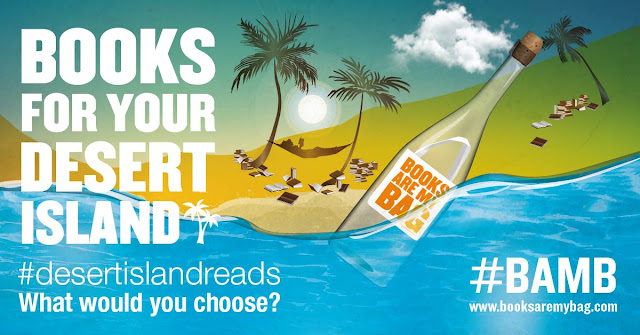 It's Books Are My Bag 2015! For those of you not in the know, BAMB is a campaign that runs from Super Thursday (Today!) to the following Saturday every year, and is designed to encourage people to go out and shop in their local high street bookshops instead of buying books online. Lots of bookshops all over the country will be hosting BAMB parties and events on Saturday and selling the special BAMB tote bags over all three days! Unfortunately I live in one of those strange towns without a proper bookshop so I have yet to be able to actually take part or purchase one of those sweet tote bags. This year however BAMB is asking people to pick their eight Desert Island Reads and that is something I can definitely take part in!

So put on some sunscreen, pack your swimming costume, and let me talk you through the eight books I'll be taking with me to my desert island! 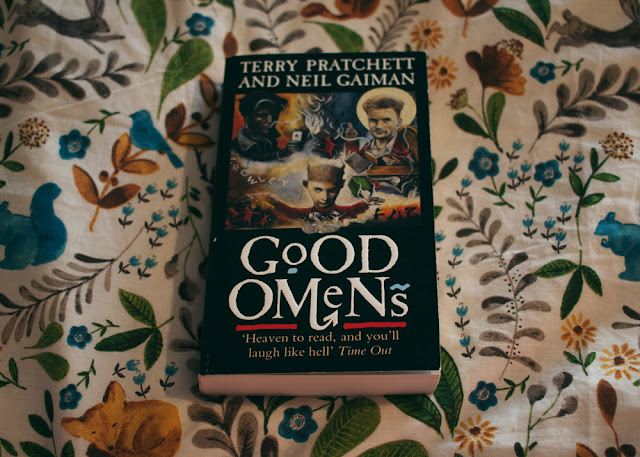 Although I only gave Good Omens four stars when I read it last year, I still found it to be one of the funniest books I've ever read and I think if I was stranded on a desert island, I would probably want a good laugh. Plus I feel like it would be a book that I would only enjoy more with each re-read, and I'm sure I'll have a lot of time on my island to dedicate to reading these books more than once. 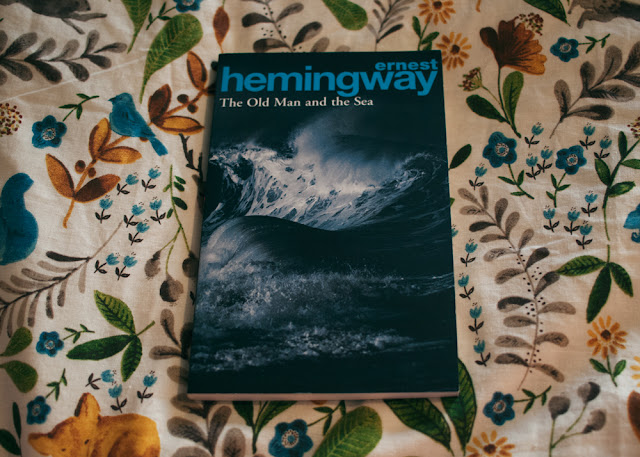 2. The Old Man and the Sea by Ernest Hemingway

For when I'm feeling a little melancholy about my chances of survival, why not have one of the ultimate books about determination in the face of potential defeat? And maybe I'll be able to pick up some tips about fishing to keep myself fed on the island too? 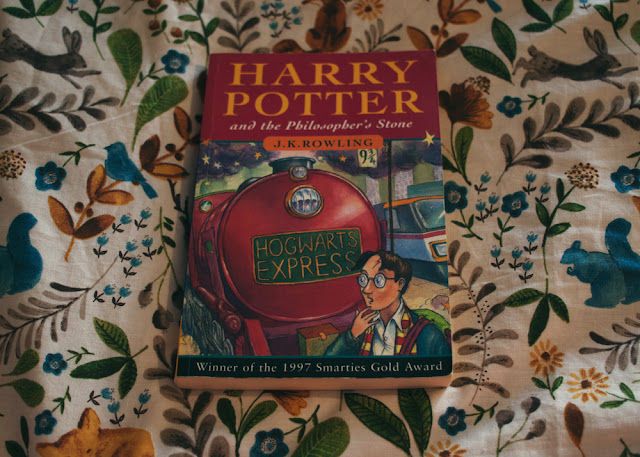 3. Harry Potter and the Philosopher's Stone by J.K. Rowling

Look, maybe Harry Potter is a hugely predictable choice, but there is no way I'm getting stranded on an island in the middle of nowhere for lord knows how long without some Harry to keep me company. I considered bringing Goblet of Fire, which is potentially my favourite, or Order of the Phoenix, which is by far the biggest in the series and would probably keep me going for a good few days, but at the end of the day you just can't beat the nostalgia of Philosopher's Stone. 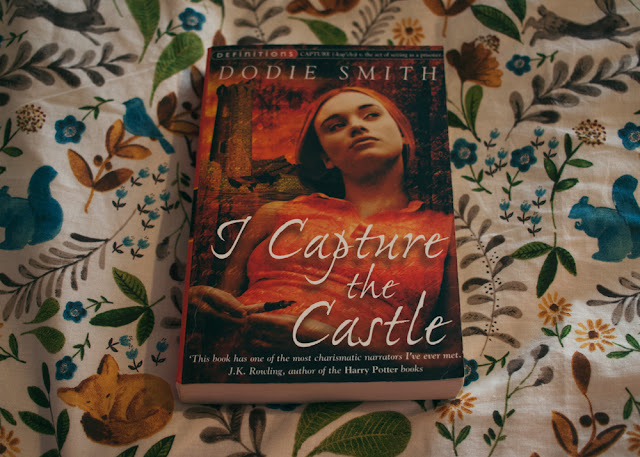 4. I Capture the Castle by Dodie Smith

I've mentioned many times before on this blog that I Capture the Castle is probably my favourite book. I love everything about it and if there's one book I know I will never tire of, it's this one. I don't want to overstate it, but if I could only take two books to this island I would probably choose Philosopher's Stone and this one. But please don't actually test me on that. 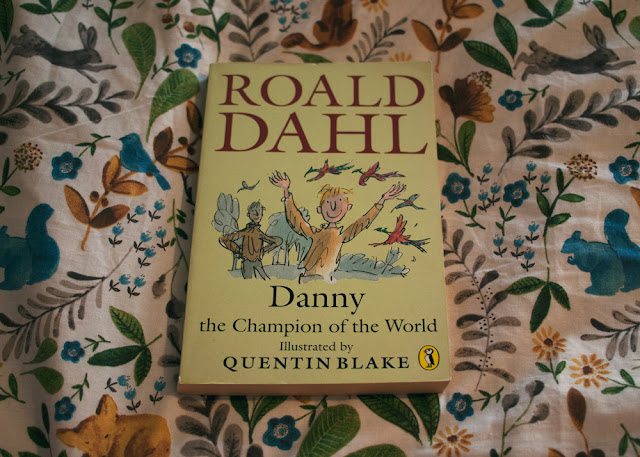 5. Danny the Champion of the World by Roald Dahl

In my opinion, Danny the Champion of the World is by far Roald Dahl's most unappreciated book. I loved Roald Dahl's books as a child (and still do, of course!) and Danny was always my favourite. I had it on audiobook and used to listen to it any time I couldn't get to sleep. So if I'm ever having trouble falling asleep on this island of mine, I know I'll be glad to have Danny the Champion of the World to keep me company.

6. Campari for Breakfast by Sara Crowe

Campari for Breakfast is another one I only read for the first time last year but I fell in love with it immediately. It has pretty much everything I love in a story and I've been meaning to re-read it for a while now, so why not finally do that with all my spare time on this island? 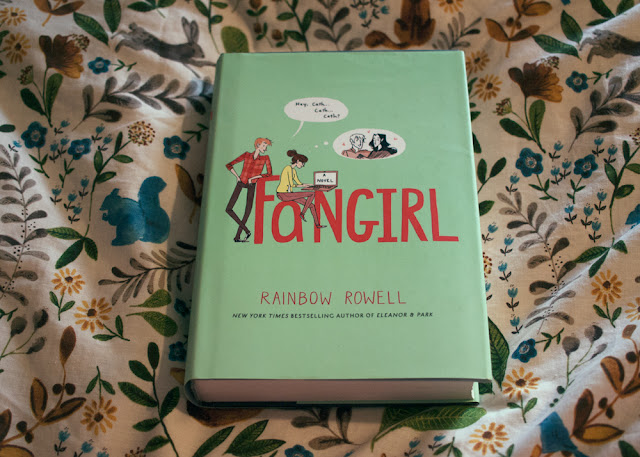 Fangirl is another book I've been meaning to re-read and like I said, I'm anticipating having a lot of spare time on this island so I might as well get these things done. Fangirl is probably my favourite Rainbow Rowell novel and Cath actually reminds me a lot of myself, so I think it's a pretty solid choice to bring with me if I'm to be stranded on my own. 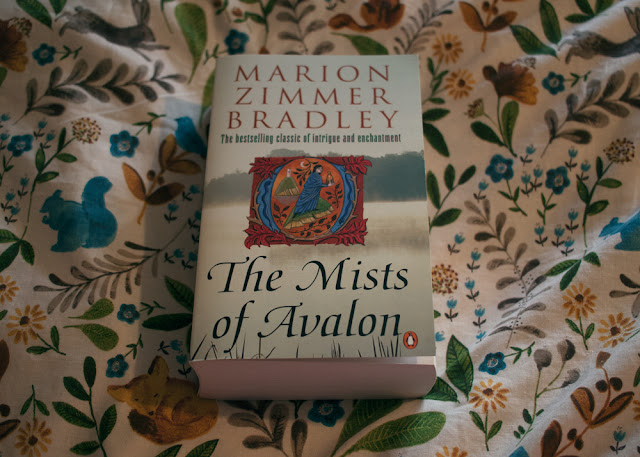 8. The Mists of Avalon by Marion Zimmer Bradley

For my last pick I've decided to throw in one that I haven't actually read yet, just in case I get tired of re-reading my old favourites and want to get into something new. I've been meaning to read The Mists of Avalon for years now but the size of it has always put me off. However, I think a nice, thick Arthurian classic might be just the thing to keep me occupied for a good, long while.

So those are my picks! Now where's my island...?

Which eight books would you choose for your desert island reads?

Email ThisBlogThis!Share to TwitterShare to FacebookShare to Pinterest
Labels: books, Books Are My Bag