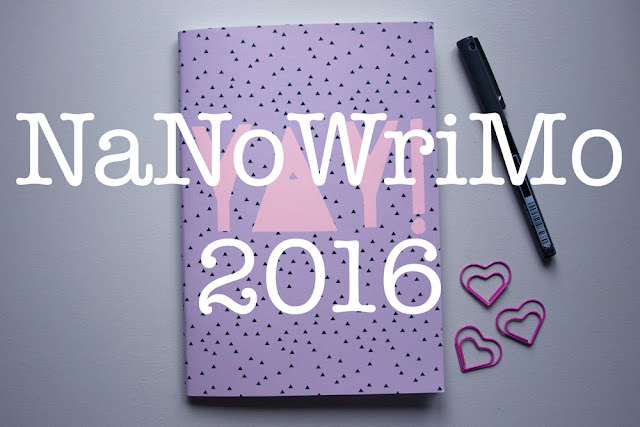 I'm doing NaNoWriMo! Again! Hopefully it will go well and hopefully I will have updates for you full of positive news about how I'm flying past all my word count goals!

We can but dream.

Anyway, no updates for today but instead I have the NaNoWriMo tag, which I'm sure we've all seen before over the years so I'll just get straight on with it.

1. How many times have you done NaNoWriMo?
I've attempted the regular November NaNoWriMo three times and Camp NaNoWriMo four times. I won one of each last year but all my other attempts have been dismal failures.

2. How did you first find out about NaNoWriMo?
I don't remember exactly but I'm pretty sure I just saw people talking about it online. Possibly on YouTube.

3. What was the name of the first novel you attempted with NaNo?
Kitten and the Wolf, which is not the worst title I've ever come up with.

4. Give us a 1 sentence summary of what you’re writing this year.
The second draft of last year's project.

5. What’s the best writing advice you’ve ever been given?
'Don't write what you know, know what you write.' I can't remember where that came from but it really stuck.

6. Did you ever take a year off from NaNo? Why?
My first attempt was in my first year of university and I think I only actually lasted a day because I just didn't have the time, so I didn't try again until after I had completely finished uni.

7. What’s your biggest inspiration when figuring out what to write?
I actually have a lot of ideas stored up so when it comes to deciding what I want to work on for NaNoWriMo, I just pick whichever idea I'm most passionate about at the time and try to get on with it.

8. Give us the first sentence from one of your novels.
'The first fifteen years of my life were pretty normal.' That's from last year's NaNoWriMo project, which I'll be redrafting for this year's attempt, and that line probably won't be staying. Not least because I'm thinking about switching the whole thing to third person narration.

9. Why do you love writing?
I don't most of the time, but I do really love having written. Which I think is pretty common. At least I hope it is...