Did you ever do that thing with your friends where you all sit around and decide which characters you each are from a certain TV show? (Friends is the classic example. I'm Chandler.) I recently re-watched the entire of Miranda, followed by some new episodes of New Girl, and realised that my personality basically boils down to this diagram: 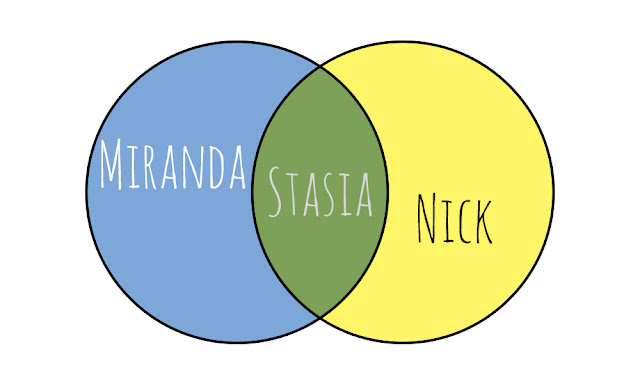 I've been told in the past that I could be the child of Chuck and Ned from Pushing Daisies and yes, that is the biggest compliment I have ever received and I will absolutely take it, but if I am completely honest with myself, that would not be the most accurate diagram. The most accurate diagram is the one above, that I lovingly made especially to illustrate this point: my entire personality is basically just a strange mixture of Miranda from Miranda and Nick from New Girl. In my heart I know this to be true. Also, I have proof.

Exhibit A: How I tend to (not) deal with my problems.

I lived with my friend Jess for three years and she will attest to the amount of times I seem to think that lying on the floor will fix things. It rarely does.

Exhibit B: My idea of a good time.

I literally went to a club once and decided that was quite enough of that for me. I'll take a quiet night in every time.

Exhibit C: How I feel about getting older.

Being a teenager always felt so ridiculous to me and for years now I've been saying that I think I'll probably hit my stride somewhere in my 50s.

Exhibit D: My approach to writing.

Again, just ask Jess how many times I have literally compared myself to Hemingway. She bought me a hip flask for my 21st birthday so that I could continue the theme. And, just like Nick, I have still yet to write The Sun Also Rises.

I have made use of the hip flask though.

If you've never thought about your personality as a venn diagram of fictional characters then I highly recommend you do it right now and let me know which characters you would use for your diagram in the comments!

Email ThisBlogThis!Share to TwitterShare to FacebookShare to Pinterest
Labels: tv