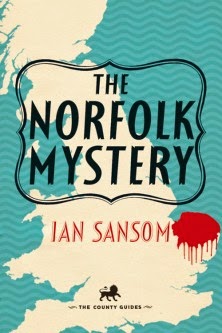 Spanish Civil War veteran Stephen Sefton is flat broke. So when he sees a mysterious advertisement for a job where 'intelligence is essential', he applies.

Thus begins Sefton's association with Professor Swanton Morley, autodidact. Morley intends to write a history of England, county by county. His assistant must be able to tolerate his every eccentricity - and withstand the attentions of his beguiling daughter, Miriam.

The trio begin the project in Norfolk, but when the vicar of Blakeney is found hanging from his church's bell rope, they find themselves drawn into a fiendish plot. Did the reverend really take his own life, or was it - murder?
(x)

I picked up The Norfolk Mystery on a whim a few weeks ago. It's an enjoyable read. It's sort of cosy and something about it feels very English. However, I did expect more mystery.

The vicar is found hanged and Morley and Sefton do take an interest in the possibility that it might not be the suicide it appears to be. However, there is really very little actual investigation and Morley's deduction as presented near the end of the novel seems to come completely from nowhere. I understand that this could be a little bit of a parody of the early 20th century mystery novels - and maybe I'm just not well versed enough in the tropes of those novels to fully appreciate it - but the rest of the novel just doesn't seem to be so obviously a parody of anything.

There is some interesting social commentary throughout the novel, which is as relevant today as it was during the time between the two world wars, when this story is set. Morley's views about the goings on in the world sort of balance out how bloody annoying he is the rest of the time. There are also photographs throughout the book, which I had expected to be a fan of (I wrote my dissertation on illustrated novels so I have a specific interest) however in this case I just didn't think the photographs did anything for the narrative.

Despite these complaints, The Norfolk Mystery was an enjoyable read but I'm not sure I'll be picking up the sequel when it's released.

I mean, Morley spends half the book speaking Latin. What's that about? Is that parody???