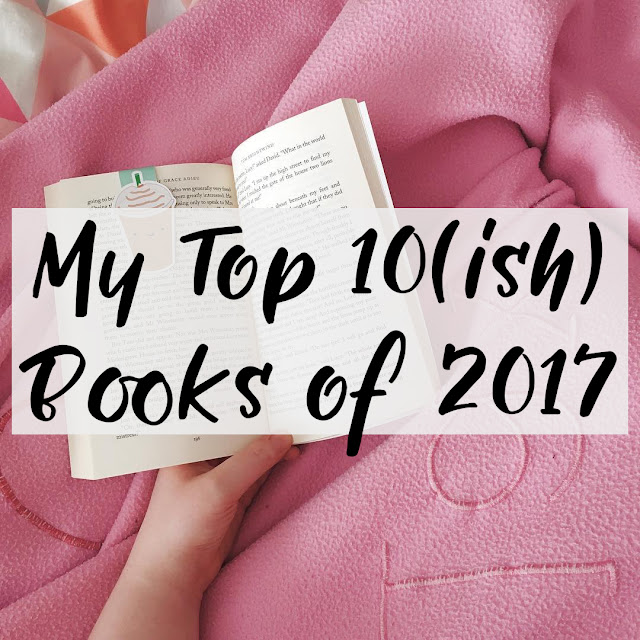 I read a total of 63 books in 2017, surpassing my GoodReads Challenge goal by 11 books. I discovered some new favourite books, some new favourite authors, some new favourite worlds. I joined my local library and Netgalley. I read some books that have been on my TBR for years and some that were brand new. I started listening to audiobooks again. I read 7 books in one week for the BookTubeAThon. I reviewed 11 books for Blogger's Bookshelf.

In short, it's tough to single out just 10 of the many great books I read last year but for you, dear readers, I've done my best, which in typical Stasia style means I haven't quite managed it. I got close though and I make the rules around here anyway so who cares?

These are my top 10(ish) books of 2017 in order of when I read them because putting them in order of how much I liked them really would be a step too far. 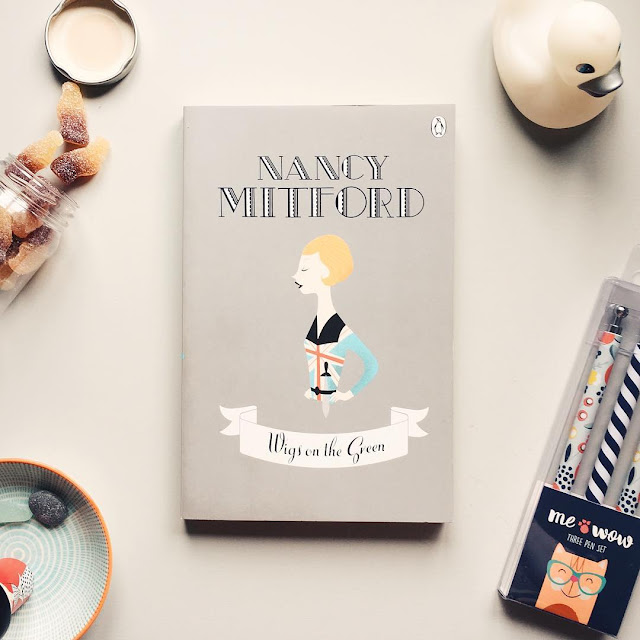 Wigs on the Green is not for everyone. It's an extremely satirical look at the rise of fascism in the UK in the early 1930s, something Mitford was familiar with as two of her sisters were supporters of Mosley's Blackshirts and indeed Hitler himself. She later came to regret the release of the book and wouldn't allow it to be reprinted in her lifetime because of the rift it caused between herself and her sisters, who took themselves very seriously and did not appreciate their sister making fun of them in this novel. Personally, I think making fun of fascists is a great idea and Nancy Mitford did it splendidly. 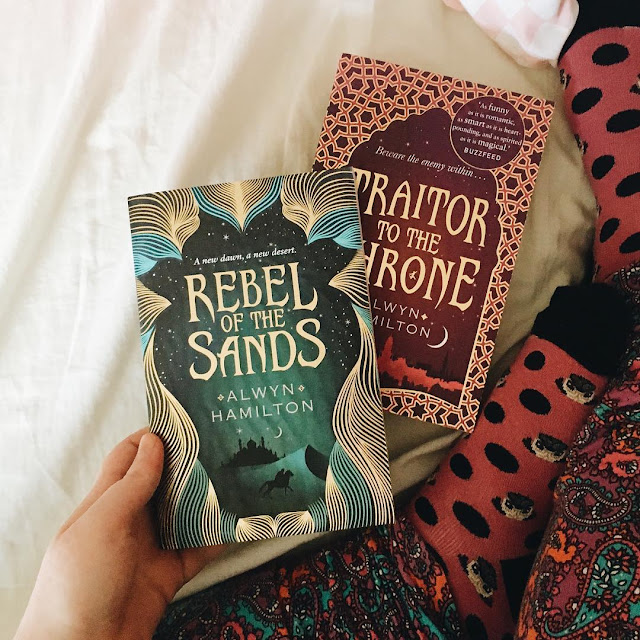 I picked up Rebel of the Sands early last year when I had injured my back so badly that I could barely move. I was in a lot of pain and needed something magical that would take me away to another world for a day or two and Rebel of the Sands proved to be the perfect thing. I devoured the story of Amani the gunslinging girl on the run the way I used to devour books when I was young, as though I couldn't read the story quick enough, needing to know everything at once. I was completely immersed in the magical desert setting and, as you can see, immediately bought the sequel, which I thought was even better. I can't wait to get my hands on the third and final book in the series soon. 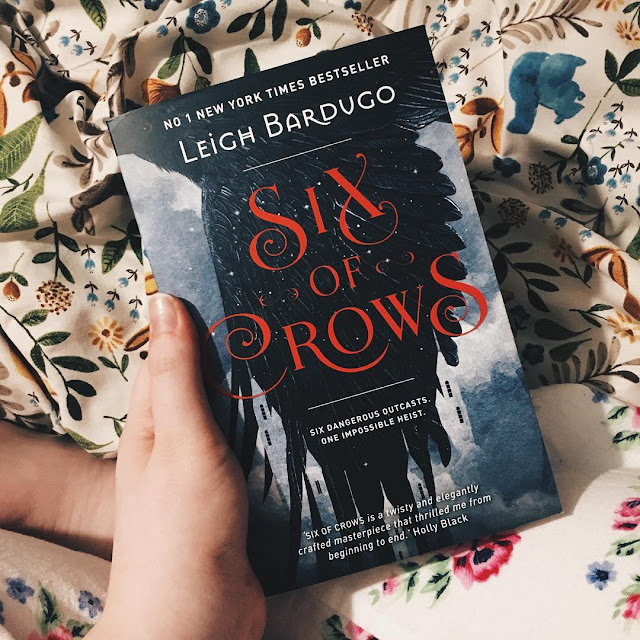 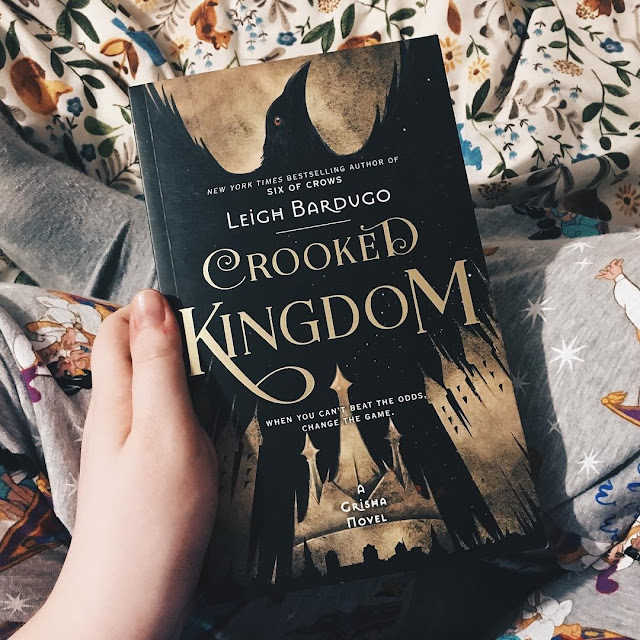 Six of Crows and Crooked Kingdom by Leigh Bardugo

I hadn't read any of Leigh Bardugo's other novels before picking up Six of Crows but the story line, about an impossible heist carried out by a gang of plucky convicts and misfits, had me straight away so I bought the sequel, Crooked Kingdom, before I even read the first page of Six of Crows. I'm incredibly glad I did because much as I loved Six of Crows (and I did) I loved Crooked Kingdom even more and Six of Crows ended in such a way that I would have been furious had I not had the next book immediately to hand. The rich world and complex story line are impressive but for me the characters are the real gold in this duology, and they will stay with me for a long time. 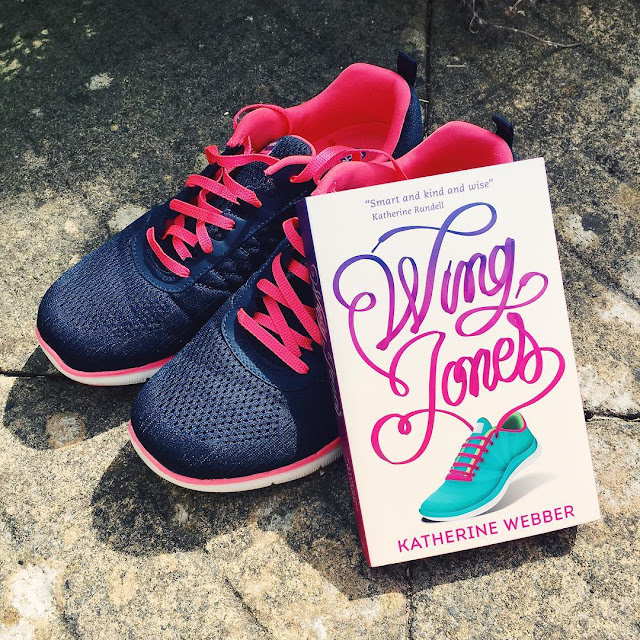 Wing Jones knocked me over sideways. I mostly bought it, I'll be honest, because it has super beautiful ombre sprayed edges, but then I started reading it and wow. The inside of this book is every bit as beautiful as the outside. The writing, the story, Wing Jones herself, are all so amazing. Every word is laced with a particular kind of magic, not like the fantasy of Rebel of the Sands or Six of Crows but something ethereal and down to earth all at once, as though it's of our world but just out of reach. It's beautiful, through and through, and immediately joined the ranks of my all time favourite novels. 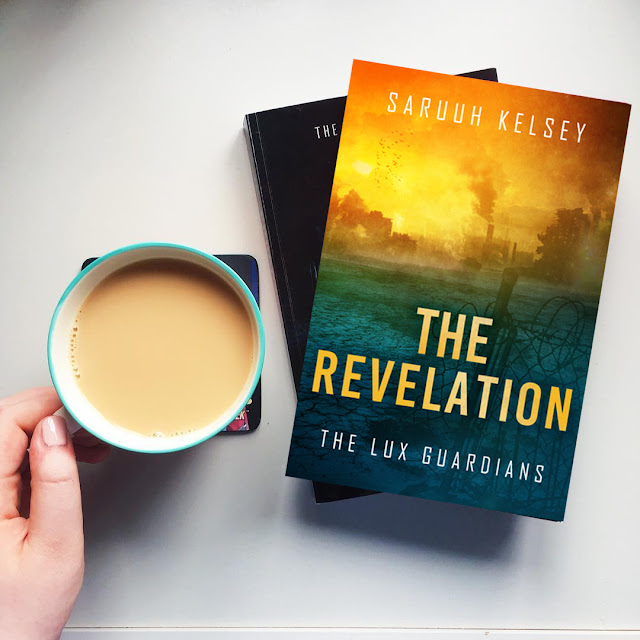 The Revelation is the third in The Lux Guardians series, written by my friend Saruuh Kelsey, and yes I photoshopped that cover onto a picture of the first two books because I don't actually have a paperback copy of this one yet. I'm so proud of everything Saruuh writes but this series in particular is extremely close to my heart. The dystopian world she's created is gripping and horrific and the characters who populate it are full of life and colour. Even if Saruuh wasn't my friend I would love these books and I thoroughly look forward to joining these characters again in the next one. 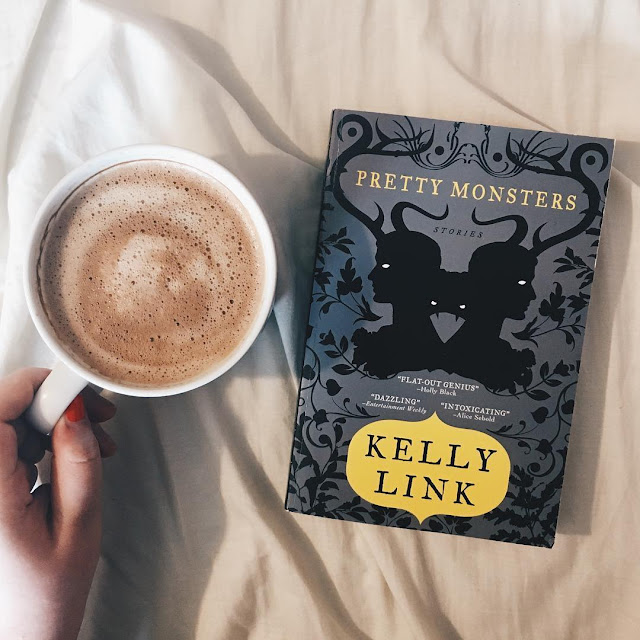 I don't read a lot of short story collections and I think it's mostly because 99% of the time I will choose a YA book over anything else so I was thrilled to discover Kelly Link's Pretty Monsters last year, a collection of short stories specifically for YA readers. This is a deliciously weird collection of tales in which everything is always just a little bit off. Each story is a glimpse into a fascinating, unique, and, at times, pretty creepy world. This is definitely a collection I'll come to again, probably around Halloween time. 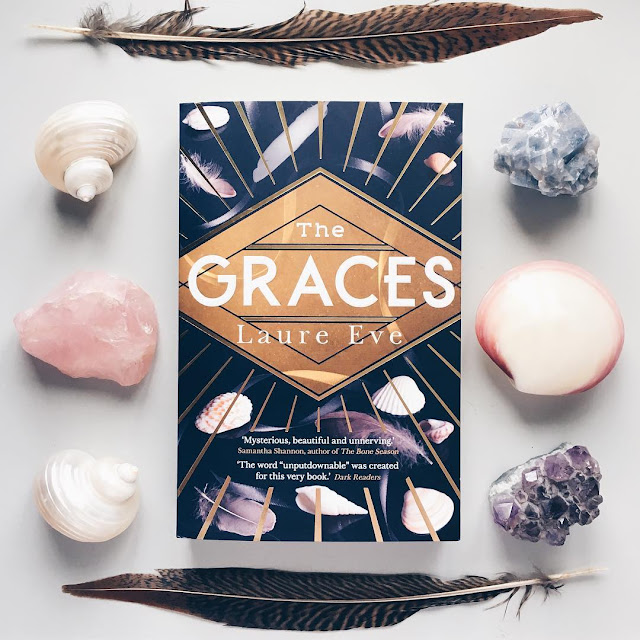 The Graces by Laure Eve

From deliciously weird to deliciously dark, The Graces was another book that knocked me sideways this year. This is an extremely intense read and another one that I couldn't put down. The entire story of River and her obsession with The Graces, a family of beautiful siblings who may or may not be witches, is told with prose that feels charged with potential for things to go wrong and a burning necessity for them not to. Even the most innocent of scenes made my stomach twist and the real twists made my heart stop. This book so thoroughly absorbed me that I'm surprised I managed to read anything else in the weeks afterwards. I need the sequel asap. 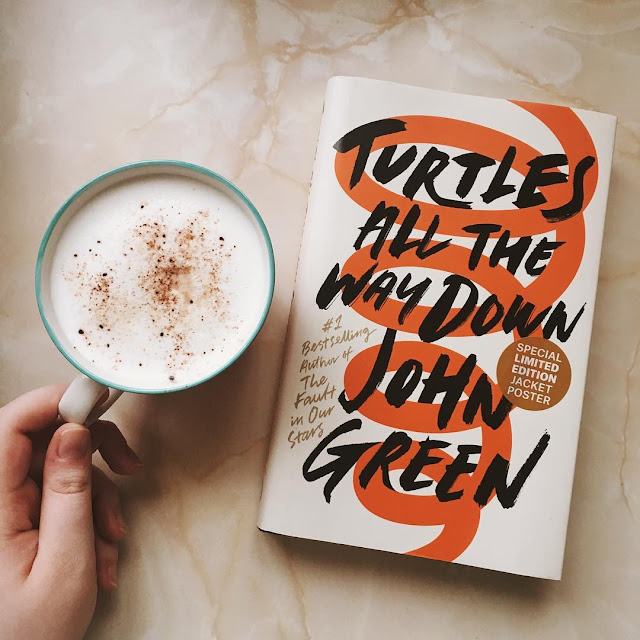 Turtles All the Way Down by John Green

I'm a big fan of John Green but it's been a while since his last book, which might be why I wasn't quite prepared for just how much I would love this one. It's difficult to pin down why exactly Turtles All the Way Down immediately became my favourite of John Green's novels but it probably has a lot to do with Aza, the main character, and her best friend, Daisy, whose friendship felt so honest and close that I think I would have loved this book even if it had just been about the two of them hanging out together at Applebee's. It isn't just that though, it's so much more. I can't even talk about it. I love it. 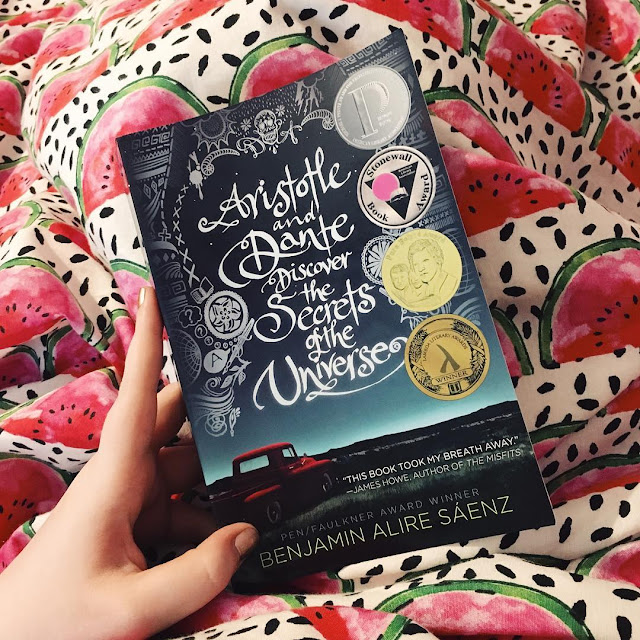 Another book I can't even talk about is Aristotle and Dante Discover the Secrets of the Universe. This book has been hanging out on my TBR for a long time. I don't know what finally made me pick it up but I am so glad that I did. This is such a beautiful story, so beautifully told, of two boys figuring out how to be themselves, how to be men, whatever that means. It's a story of love, told in a way I can't even describe, a way that feels as though it is being told directly to your soul, or your heart, or whatever part of you it is that aches when you read something so touching. It's a triumph of a book and well deserves all those awards that are so annoyingly covering up the design on the cover. 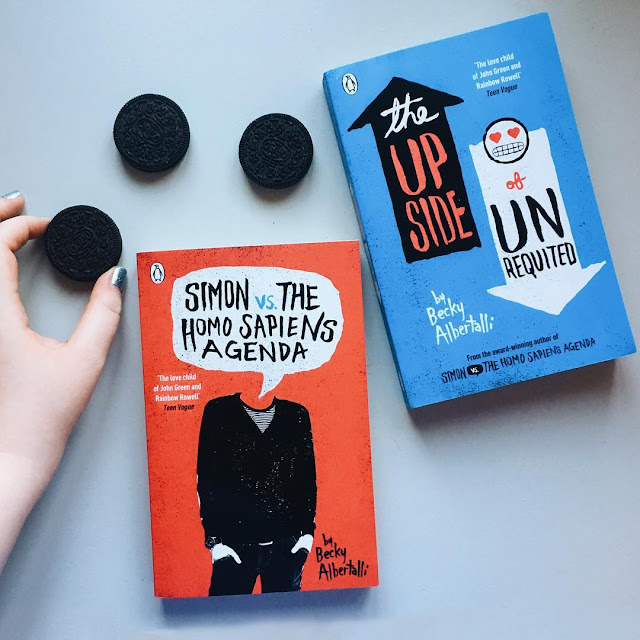 Simon Vs the Homo Sapiens Agenda by Becky Albertalli

Please ignore The Upside of Unrequited in this picture. I'm sure I'll love that book too but I haven't actually read it yet, I just don't have any pictures of Simon Vs the Homo Sapiens Agenda on its own. Sorry. After just one book though, Becky Albertalli is already a new favourite author for me. Simon Vs the Homo Sapiens Agenda was perfect. I loved Simon and I loved the way his story was told. When he was flirting with Blue over email, when he was being blackmailed because of those emails, and when things got even worse than that, I felt along with Simon, everything that he felt. I desperately wanted things to just go well for him! It was like I was reading about my own kid brother. This book is funny, and touching, and kind. Perfect.

And those are my top 10(ish) books of 2017! Have you read any of these? What did you think of them? Obviously, I highly recommend them all.