Sofia Khan is Not Obliged review. 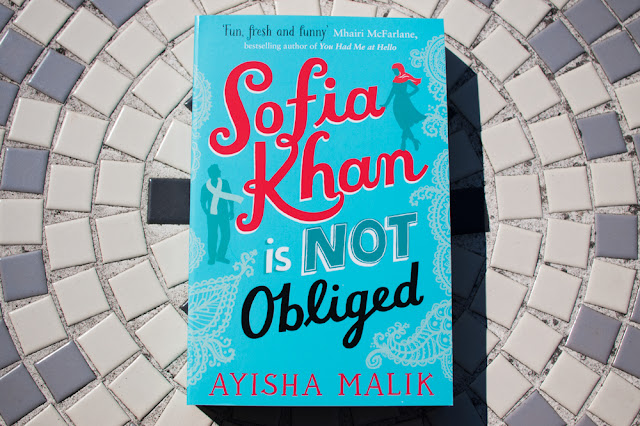 Sofia works in publishing but she has no plans of being a writer. Until, that is, Sofia's boss hears about her recent break-up and decides that a book about Muslim dating would be an excellent idea and Sofia should be the one to write it. Lured in by the promised £10,000 advance, Sofia is soon balancing her day job with fake dates, writing deadlines, her friends' love problems, and her sister's upcoming wedding. And, of course, though the dates may be fake, the feelings are harder to control.

Sofia is a very charming and funny narrator and while I can definitely see where the Bridget Jones comparisons are coming from, I found Sofia infinitely more likeable. (Sorry, Bridget. The film version of Bridget probably still wins, if that's any consolation?) It's hard not to fall a little bit in love with a character who, in the very first chapter, angrily yells at a jerk on the tube that 'terrorists don't wear vintage shoes'.

This is a book about love, of course. Sofia is writing a book about dating, after all. But there is as much, if not more, about Sofia's family, and her friends, and her faith. This is definitely a book about her love for all of those things, just as much as it is about falling in love. Although, can I just say, the ending? I was hoping for that. I was behind that all along and I was thrilled when it finally happened! That's all I'll say. I wouldn't want to give anything away! (I'm still very happy about it though.)

Honestly, I nearly gave the book five stars just for the ending alone, but I couldn't get past the niggling feeling I had all the way through about wanting to know more about Sofia's friends. They all had their own things going on and their stories were hinted at, and some of them were shown more fully, but there were a few references to her friends' love lives that I still didn't totally understand, even at the end. There was one character who was repeatedly mentioned in relation to one of Sofia's friends, and maybe I just missed the explanation, but at the end of the book I still didn't really know who that person was or what their history with Sofia's friend entailed. It's only a small thing but it did bother me a little. Although, this probably just shows how well drawn Sofia's friends were, that I was so interested in hearing more about them!

Sofia's friends were all really interesting and great supporting characters and her family were too. I heard so much about how funny this book was but no one ever mentioned how much it would make me cry! All of Sofia's relationships, romantic and otherwise, were so well done and such a joy to read about that I really got quite attached to everyone and I can't wait to read more about them all in the sequel!