stasialikesbooks | Would you rather: book edition.

I already typed up this entire post once and then accidentally deleted it and I am Not Happy about it, but anyway... I recently saw this tag on The Book Journal and thought it seemed like a fun bunch of questions. So let's get started! (Again!) 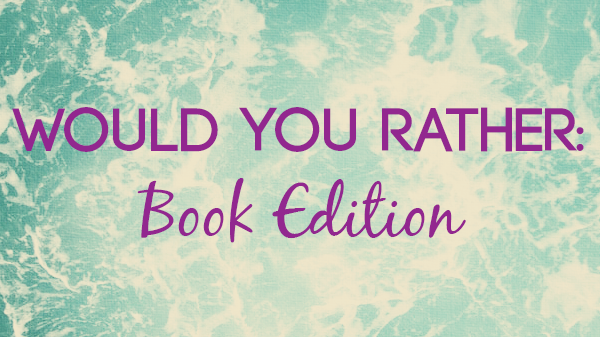 Would you rather read only male or female authors?
Female authors. There's still one Raven Boys book to be released and I am not missing out on that!

Would you rather shop at Barnes & Noble Waterstones or Amazon?
I would rather shop at Waterstones but when you buy as many books as I do sometimes you have to go for the cheaper option, you know? I do prefer a proper bookshop though. Especially because there isn't one where I live.

Would you rather books became films or TV shows?
I love TV but thinking about it, if a book is made into a film then yes some things will have to be left out but if it's made into a TV show then eventually whoever is making it is going to run out of source material and have to add things and make up extra story lines and I think for a book I really love I'd prefer having things cut out for a film than have that happen. So I'll say film. Unless we're talking about a one off mini-series... This is a very complicated decision.

Would you rather be a professional reviewer or an author?
Author.

Would you rather be a librarian or a bookseller?
A bookseller. Think of me as the female Bernard Black.