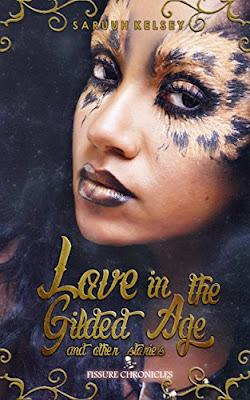 Once in a hidden queendom...

There is an ocean: In the infinite distance, between one hidden world and the next, is an unmeasurable expanse of twenty seas. One sprawling edge of the world to another is filled with waters as beautiful as they are deadly, as miraculous as they are fraught. Treasure and treachery litter their ocean beds, sleeping side by side with adventurers whose travels ended abruptly, lives caught and held under a wave until all breaths fled.

There is a land: Tucked into a corner where four oceans fold together, land rises up illustrious in a jagged slash of mountains and forests, with secrets and wonders as plentiful as any water.

There are chronicles: Not of the twenty savage seas but of the fissure of land and the people who sigh life into it.
(x)

Each of the three stories takes the source material and turns it on its head. The stories all stray from their original fairy tales but they also all contain enough of those fairy tales to be recognisable. 'Love in the Gilded Age', for example, tells the story of a girl who must spin straw into gold for a king who keeps her locked in a tower, however this is pretty much where the similarities to 'Rumpelstiltskin' end. She does promise her first born child to someone but there's a very clever twist to that promise that I won't spoil for you.

All three of these stories are about young heroines who must save themselves, someone, or something else and although they all need help from time to time that is never portrayed as a weakness. They all remain the heroes of their own stories. The stories also feature characters with disabilities, characters of colour, and LGBTQ characters, which is a lot more diversity than you'll find in most YA books right now.

These stories are all really interesting and unique takes on some of the most famous fairy tales. They're all entertaining and full of adventure and I can't wait to read the next collection!