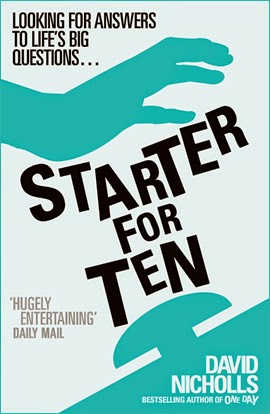 The Year is 1985. Brian Jackson, a working-class kid on full scholarship, has started his first term at university. He has a dark secret - a long-held, burning ambition to appear on the wildly popular British TV quiz show University Challenge - and now, finally, it seems the dream is about to become reality. He's made the school team, and they've completed the qualifying rounds and are limbering up for their first televised match. (And, what's more, he's fallen head over heels for one of his teammates, the beautiful, brainy, and intimidatingly posh Alice Harbinson.) Life seems perfect and triumph inevitable but as his world opens up, Brian learns that a little knowledge can be a dangerous thing.
(x)

I first saw the film version of Starter for Ten, starring James McAvoy, on TV at least a year before I went to university. I got the book shortly after but it sat on my TBR pile at home, at university, and then at home again until now, and though I enjoyed it as much as I knew I would, I'm actually glad I waited until now to read it.

Brian does not have the most amazing time during his first year at university. In fact he's a bit of a loser, but endearingly so. He may have a wealth of advanced general knowledge, but he knows nothing about people, especially how to conduct himself around girls. He's a very believable teenage boy. One of the triumphs of Nicholls's writing is that even when Brian is at his most awkward, his most weird, his most teenage boy-ish, he is still so optimistic and full of hope and self-deprecation in equal measure, that you can't help but like him. Even when he's making an absolute tit of himself in front of Alice's parents or being kind of a git to his old school mates Spence and Tone, Brian is never really mean. Which is really his big saving grace because he can certainly be a bit of an ass.

Although my university experience bared very little resemblance to Brian's (I'm not sure my uni even has a University Challenge team) Starter for Ten made me weirdly nostalgic for that time. Even though it was only a little over a year and a half ago that I was there. Nicholls perfectly captures Brian's feeling of expectation and hope that university will be different and better than school - that he will be different and better. He also perfectly captures Brian's disappointments. And always with humour.